TLDR: 3 laps. Start time 7:30. Finish time 4:43. Total time 9:13. Single speed.
I was 3rd overall behind Jason Smith (SS) and Noel Reuter. Right behind me were Barry Davis and C. Baron (hardtail) to round out the top 5 Dragon Slayers.

The inaugural Dragon Slayer was all Todd's idea.
I just want to make that clear so nobody tries to kick me in the taint (that threat has been leveled).

Generally, most folks would be more than happy to complete 1 lap of an International Mountain Biking Association Epic trail. However, in keeping with the ATX100k tradition of doing the gnarliest crap at the gnarliest places we can find, doing 3 laps for 80 miles seemed just about right.

I had to be at Russel Park to set up, which meant I had to leave my South Austin home at 4:45 am (holy crap). That's OK though, because I slept terribly and was already awake when my 4 am alarm went off. The night before I'd measured 3 laps worth of Infinit (9 total servings - 1 per hour), put 1 lap in my Camelback, and put the other 2 in dry water bottles so I can add water, shake and go. You'd think I would mix them ahead of time so it would be faster the day of, but I'm superstitious so I don't pre-mix them so as to not jinx myself (we're all weird, don't judge). I also put 6 electrolyte pills in my strap pocket, b/c I've found that I need a pair of those every 3 hours or so to keep from cramping up. I'd mixed up a bottle of my specially formulated 'pickle juice'. It tastes like Satan's butthole and it'll gag the guy riding IN FRONT of you, but it'll kill a cramp in 30 seconds, every time. I was riding my Breezer aluminum single-speed frame I picked up for $100 from an un-named good Samaritan. It's got a shock, so I'm not a complete masochist, but the shock does suck and that aluminum frame delivers quite a beating to the twig and berries...

I got to Russel just before 6 am to see Todd moving cones around. He'd slept about 3 hours the night before too. It's been a while since we'd put on a race so I guess we both had the jitters. He'd also been out late replacing flagging that some brain-donor had pulled down. I got kitted out, chatted with a few of the early arrivals and started directing traffic. We'd set the entry limit at 75 b/c we weren't sure how much parking we would have, but it looks like next year we can probably swing 100 riders? Take note: register early, ya slackers.

Before I knew it, Todd called the pre-race meeting (consisting mostly of 'don't count on anyone but yourself' and 'don't be a dick') then we were off. I was in the first group along with Shane and Noel (who I'd finished the Enchilada Buffet with last year). Noel didn't seem like he was hurting at all after winning the EB, so I figured he'd set a gross pace (I was right...). Shane and I were on his wheel for a few miles but he eventually walked off and left us. Chuck and Dwayne went around us at Hogg Park for about a mile until they burped a giant-ass tire and had to stop. A one-lapper passed us right at that slippery sketch bridge and he also immediately had a flat. I guess passing us is bad luck (take note, motherfuckers!)?
For the rest of that lap, Shane and I were alone. I'd work a bit ahead of him in the rock and he'd run me down and keep me honest in the flats. Lap time 2:47:27.

Starting the 2nd lap, I mixed 3 servings of Infinit and  threw a 1/2 bottle of 'pickle juice' on my bike. Shane lit out of the pit ahead of me, and I caught up to him at some point, not really sure where. I do remember those first 8 miles of rock had me cramping. I also kept imagining that the leaves I was running over where Orchid Mantises, which was kinda freaking me out. Miles 30-40 were the worst for me of the whole ride, probably due to the speed of the first lap, some nerves, and not drinking enough Infinit because I wasn't that thirsty. At some point, maybe in the the South Shore mess, Shane and I got separated, and I'd not see him again until the finish. About mid way through the 2nd lap, Jason Smith caught up to me as I was walking up a hill (take note, he was 6 min behind me at the start), and I rode with him for about a mile before he pulled away. I was encouraging him to go catch Noel, that he was making up a lot of time since Noel was in my starting group. I caught him again at the very end of the fire roads and we finished up the 2nd lap pretty close together. 2nd lap 2:58:41

After a quick pit, with 'The Todds' yelling at me to pit faster, I started my third lap. I saw Barry as I was leaving and decided to give him a rabbit to chase. I fully expected him to run me down but somehow I kept out in front of him. Third lap was pretty uneventful, just the usual despair and agony of an ATX100k event. I was super glad to see 'Make-out Point' (Cody - call me!) for the 3rd and final time. Right after that is the bit with all the Elm trees - it's just a really flowy bench cut for a mile or so. That's basically the last bit of technical riding before the finish line 8 miles away. Just before Russel park I heard my kid's chant 'BE AWESOME DADDY!' and I was overjoyed. They'd surprised me by showing up and had walked down the trail a bit to wait for me. I stopped to give them each a gross, salty smooch on the cheek and I hammered up the trail trying to look way fresher than I felt. I wrapped up the 3rd lap in 3:22:25, rolling into the parking lot at 4:43 pm. 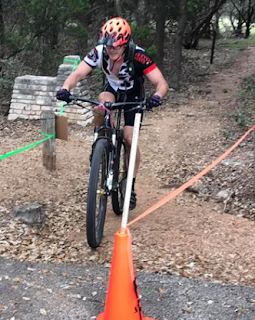 The Dragon Slayer was a great event, hands down one of the best rides I've been on. Lots of solitude, lots of tech demanding your focus and no cars to worry about. The Slayer was perfect initiation into the world of single-speed 'not-a-race' racing. Thanks to the other organizers, I really didn't do anything other than show up and tell folks where to park. Huge thanks to Todd for organizing the event. Thanks to Lee Compton for all his work maintaining the trails.

Big thanks to Texas Cycle Werks, Georgetown Cyclewerks, The Peddler Bike Shop, Orange Seal, Hammer Nutrition, 512 Brewing, and Lezyne Lighting for all the loot and support. I've never been to a race with 75 participants and that many prizes. The loot tables were sagging for goodness sake!

Just like the Immortal Twisted Sister said: 'I Won A Rock!'
Posted by Unknown at 7:46 PM 2 comments: