This is a bit of a long post, but I think it's worth it.  For those of you cursed with a short attention span you can find Strava maps with distances in the Austin Greenbelt club widget on the right (check Lonnie or John for the full EPIC+). Also, check out the facebook page for more pics.

The Chihuahuan Desert Dirt Fest was awesome.  In large part because of the people of Terlingua and Lajitas, and the great work by Mike Long and crew of Desert Sports.  Both of these small desert towns have an incredible vibe and the residents rock.  As we rolled past Terlingua on the way to Lajitas, we were treated to an amazing rainbow. In fact, it was a double rainbow. All the way.  Oh. My.  God.    We were unsure what it actually meant. 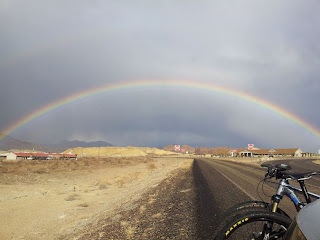 When we got to the Maverick campground I was pleasantly surprised to see it has a nice set of showers, indoor couches & chairs and a pretty large 2 story open single room which held registration. It wasn't what I was expecting from a campground - it was way nicer. There was a keg of Fireman's Four and a bunch of bikers standing around drinking and telling stories.  Lonnie is very familiar with Terlingua and said we really should check out the store and Starlight.  We headed over to the Terlingua store and the Starlight restaurant/bar/music venue/dance hall. The vibe was super relaxed, locals and tourists, bikers and dogs, all chilling on a long porch drinking beer and playing guitars.  We got a table at the Starlight and had a really awesome meal - I got a wild boar burger and a few Lone Stars.  I gotta say, it was a pretty perfect arrival.

That night it rained and hailed, so instead of waking up early and heading out to the scheduled rides we slept in to give the white desert clay time to dry out. Regardless, on the way out our wheel-wells got packed with clay and we actually had to remove one of the wheels to get it all out.  It was on it's way to becoming pottery and we could smell burned rubber when the car hit a dip...

We grabbed a quick breakfast at the Fina station (pretty damn fine cuisine, even if I do say so myself) and headed into the national park to check out the sights. It was really beautiful, rising from flat desolation through a layer of clouds and breaking into a desert montaine environment with grey oak, madrone and pinyon pine. There was a mother doe with 2 fawns (one of which had decided his favorite pastime was standing in front of our vehicle and staring at us like there were monkeys issuing from our backsides) 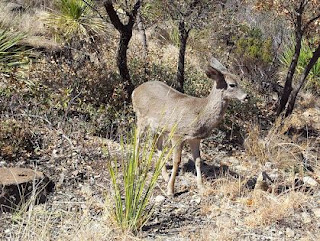 We headed down, back through the clouds (mindful of any ptarmigans in the willows) and started towards the Lajitas airport trails.  We did a 16 mile loop (loop 4) and it was damn fun. The back side had some serious whoops and fast, loose singletrack.  The only real obstacles were sharp small little runoff gulleys, which were very prevalent.  Nothing technically difficult unless you're not comfortable with pulling a ton of mini-wheelies over V-shaped gulleys. I'd never ridden anything like that before and I really dug it. Here is a vid my buddy John took:

We made sure to get some good sleep that night because we were riding the 54 mile EPIC in the morning. Weather-wise, it drizzled steadily for a few hours that evening. We woke excited but a bit wary, imagining huge 20lb blobs of clay solidifying between our tires and shock legs and coating the undersides of our seats with stalactites of lovely desert pottery. Our fears about the trail turned out to be unfounded, though Mike Long (owner of Desert Sports and a truly stand-up guy) did have us skip the Dog Cholla section due to some wet spots. Mike also told us that this was going to be his 5th time around the EPIC in like 2 weeks or something. Crazy. The rules Mike laid out at the parking  lot were along these lines:

"You need to be at checkpoint 'X' by time 'Y'. I'll be sweeping the course.  If I pass you, you're welcome to continue on the ride, turn back or try a different shorter loop but know if you continue you're no longer part of the supported ride".

When he said supported, he wasn't kidding. The trail was crawling with rangers, off road vehicles, stretcher bearing good-nics, water stops, etc (when I say 'crawling' please know that it was 'crawling' for a desolate desert wilderness - there were people about every 10-15 miles ). I definitely felt supported, which you will find in a minute turned out to be a really good thing.

The Epic started out wonderfully, rolling through some really, REALLY vast country. Hell, the vistas have vistas and I'm pretty sure that behind every mountain was a higher mountain. The trail winds between canyon walls, along rocky river beds, over fields of bright white quartz and skirts the Solatario (an ancient volcanic formation).  There are a few high-consequence bits you ride over (narrow trail bits with a steep fall off one side) but all in all the trail is pretty mild.  The difficulty of this trail comes in when contending with the elements (heat, aridity, isolation), tons of climbing (both steep/short and gradual/long) and exploding drivetrains.

Yeah, that's what I said: exploding drivetrains. At mile 27/54 I was riding in the middle of my 2 buddies. My buddy John was behind me and saw what he could only describe as "yer fuuuuuuuuuked...".  The chain somehow wrapped the derailleur around the dropout, twisting and snapping the chain, twisting and snapping the hanger, yanking a tooth off the 22t ring (check the pic) and splitting and exploding the rear derailleur to the point that a spring literally whizzed by John's head.  We had brought 6 master links, 4 tubes, 1 tire, a nice bike light, enough food and clothing to last overnight for sure, fire starting materials and several usb battery devices for cell phone emergencies. We found, however, it is not possible to prepare for every eventuality. 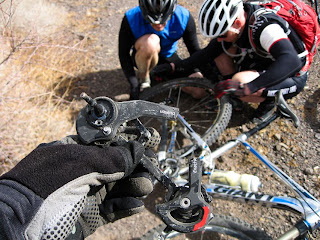 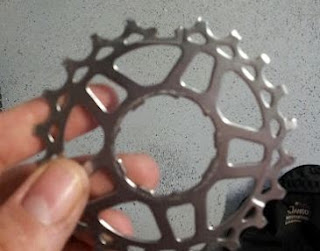 We started trying to set the bike up (a full suspension Giant Anthem X) as a single speed. That proved difficult since my shock doesn't have a lockout and we didn't bring a shock pump.  It was also made more difficult by the fact the the chain was super-twisted, requiring us to eyeball the chain, take out the un-twisted chunks and try to pin them all together. We tried, unsuccessfully, to make a chain tensioner out of duct tape and zip-ties.  Actually, it worked really well until the chain sawed through the zip-tie. 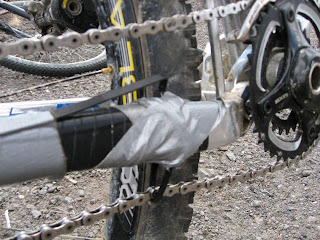 Without a rear derailleur to limit the chain, every time the suspension was weighted or un-weighted the bike would try to shift. This snapped the chain one more time before we go to the Sauceda ranger station. We were actually, crazily, still considering trying to ride the bike out until I discovered a missing spoke. That was the straw (spoke, whatever) that broke this camels back.

At this point I feel I should mention Mike Long's amazing attitude about this situation. He'd swept us at the final chain snap so it was clear we were really falling behind. He rode with us to the ranger station and hung out with us there, listening to our (in retrospect) insane babble about riding out the remaining 25 miles on a destroyed drivetrain. He never told us 'no', never said 'I don't recommend it' or even gave us a double-barrel type 'Dudes, you've all obviously been infected with a brain eating bacteria of some sort because the shit you're talking is inane. May God have mercy on your souls'(which is exactly what I would have said, but just with more cuss words). He just calmly watched us, chimed in when we asked him for his opinion and trusted in us, as cyclists, to make the right choice. I'd also like to point out that it would have been on him, as the sweeper to deal with me when the scraps of my drivetrain inevitably re-exploded on down the trail.  I am still awed by his calmness in the face of that impending, unnecessary personal burden.  I have a feeling if we did end up deciding to try to finish out the EPIC, Mike might have voiced some concern, but the amazing part is that he trusted he wouldn't have to. I didn't get to ride with him much, but John said the guy is an A+ descender.

I hitched a ride out of the park from some very happy, helpful rangers. I got to ride shotgun with Bud Coffee on the 40ish mile ride back to Lajitas.  Nice guy with some great stories about the area; not the finish I was hoping for, but a decent time for a consolation prize.

That night we hung out at Maverick's for a while, had some keg beer but decided to hit Starlight one more time for dinner.  It was, once again, great.  Lonnie had brought some really nice beer which helped to take the sting off the unfinished EPIC and the $300+ in repairs I'd have to foot once I got back to Austin.