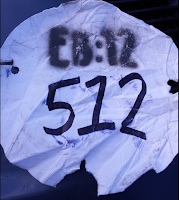 The Enchilada Buffet (EB) is an Austin grassroots ride that links together 5 of Austin's best mountain bike trails. It's not a race per se', but there are awards for fastest man and woman, slowest man and woman, and oldest finisher. I rode it this year on my Giant Anthem X, which wouldn't have happened without Steve at Texas Cycle Werks. I had worn out some parts on my rear shock and replacement parts wouldn't have been available by the EB so, on Thursday, Steve GAVE ME THE SHOCK OFF HIS PERSONAL BIKE. That, my friends, has got to be some of the best bike service in the state.
This year started off with 113 riders at Walnut Creek park. We headed out at 6:40 and took some gravel roads through WC to get to more bike friendly streets. We hit the Greenbelt around 8 am in a hilariously dangerous but very friendly drop down some limestone 'steps' from the Zilker parking lot - about 50 guys dropping into a narrow stair of natural un-cut limestone after riding for an hour with their shocks locked out. It was a new experience descending alongside that many guys, everyone being jovial and cool while trying to reach their shock lockout w/o endo'ing. It's a testament to how many actual mountain bikers were on the ride that, at least in my pack, nobody fell or got cross-ways.
I was out in front at this point, probably top 10 but I had to stop and relieve myself. At least 30 guys passed me which was a bit demoralizing but couldn't be helped. I spent the next hour or so gently working around all those people - it's a friendly ride so bellowing out ON YOUR RIGHT is a douche move. The corollary being not moving over when somebody is on your tail is also a douche move. Truthfully, everyone being friendly made the ride a much smoother and less frustrating experience than during an official race when calling out is expected but moving over doesn't always happen. 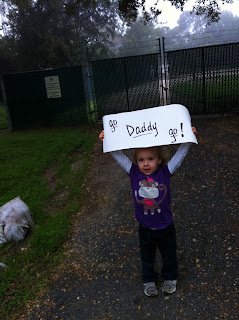 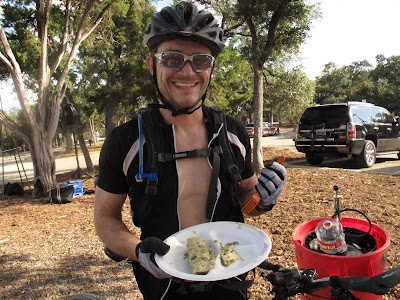