First off, thanks to the EB crew for putting on a great ride and going above and beyond with the Silipints. I know the kind of effort it takes to put on an event like this and you guys rocked it. Thanks to the Trail Angels along the way, I count on those water stops to keep me going. Finally, a big heartfelt thanks to the beer and BBQ at the end - you were delicious.

This year, I'm sporting a new Anthem thanks to the boys at Texas Cycle Werks and their warranty mojo. The 1x10 gearing usually isn't an issue but it made me a bit sad when, basically against my will, I had to pass guys on the road hills. I remember whining to Vince Colvin about it as I regretfully passed him on City Park road (but I don't WANNA go faster than you!).  This year, I set a goal of 9 hours which, considering the re-routes due to mother nature's tantrum in the Greenbelt, seemed achievable barring any mechanical issues.

The ride started at 6:40 and by about 6:42 my feet were wet and would stay that way the rest of the day. I'd taken Bill's advice, however, and was pimping some wool socks. They don't help with the pruning and they sure don't dry any quicker but they keep your feet a nice regular temperature no matter how wet they get. Thanks Bill (good finish by the way).

The roll down to BCGB was fun and uneventful. As we arrived at the pool and everyone piled into that limestone stair/chokepoint I was thinking "we're all good, this'll be no problem, just like last year. Oh, wait, except that guy - he's not gonna make it..." then he starts dabbing on the stairs and basically ended up running down those steps straddling his top tube - slightly scary but mostly pretty funny. 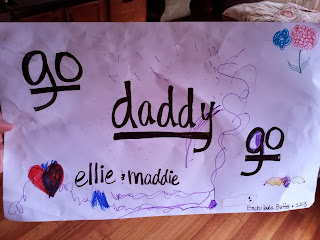 The Barton Creek Greenbelt was pretty torn up from the flood, but shadows of all the lines were still there so it wasn't that bad. My wife, daughter and mother were waiting for all of us at the turn into Jedi. I stopped to get a quick smooch from my kiddo, which, for the next few hours, Shane Wolfe would refer to as that 'illegal emotional handup' I received. Haha.

Shane and I rode the rest of the Greenbelt in tandem until the HOL. Shane wisely chose to walk several of the ledges near the end but I saw the photographer and decided to ham it up a bit. At the top of the HOL I popped through the gate and caught up to Nick Picchetti at the light. Just as the light turned green Shane slid in right behind us and the 3 of us headed off to City Park. I asked Nick how old he was. He says '22'. I looked back at Shane - "forty" and  I said "thirty-eight" and just like that Nick just moved in front of the geriatrics and started pulling our old asses down the road like a freight train. As we crossed over Bee Caves I was watching for a gap to move across the ramp and accidentally kicked up a stick - right into Shane's wheel. Thankfully, according to Shane, his spokes "Ginsu'd the motherfucker" and we blissfully carried on.

We caught up to Vince and few other riders at a light and we all started Courtyard together. I ended up walking the end to conserve the legs. Caught back up to Vince on City Park road and spent a few minutes coveting his 26 tooth front ring before 'effective gear inches' forced me to pass him. Just as I was entering CP Shane caught back up with us (he'd held back on 360 a bit). There was a big group of guys in front of us that were confused about the correct way into CP. I just took the route I'd learned last year and Shane yelled to them to follow us. One of them for sure did - Mary Kovacs. Quick note about Marty - he brought extra matches to burn on Saturday. Poor guy didn't know the route through CP though, so he was literally making all the climbs and waiting on us at the top. Finished up CP with my 2nd fastest time ever, I can thank Marty for pulling and Shane for pushing me to a near-PR in an endurance event - jerks. ;)

Mixed up my Infinit at the Trail Angel stop (thank you) and got back on the road. About halfway up CP road I started getting some cramping that I'd be dealing with the rest of the ride. The road miles were taking their toll on me; I don't ride road much and spinning in the saddle isn't in my wheelhouse due to some soft-tissue nerve damage. It was literally a relief to drop into St. Eds and Thumper after the road. Next year, I'll be conditioning my hamstrings to do something other than hold my bottom out of the saddle while I descend...

Shane and I caught up to Nick at the 2222 light and we rode with him all the way through St. Eds. St. Eds was a good time - forgot how frickin steep that trail is on the descent - fun though. We lost Nick at Cindy's station (thanks Cindy - again!) as he had some adjustments to make to his bike. Shane and I dropped into Thumper and pretty much immediately saw some guy walking backwards up the trail. He had a half-crazed look and said he'd been wandering around for 35 minutes. We told him to hop on but he just kept shuffling about - he's probably still in there. As we neared the Wall we saw Jason Smith above us through the trees. We thought it was strange that he was behind us since he is way faster than us; turns out he spent 20 minutes wandering around in St. Eds proper before he found his way to the hill. You should check out his Strava - it's pretty funny. Rolled out of Thumper, grabbed a bit of cold water and found the guys in front of us (Colvin & Royle) had left 20 minutes before. Shane suggested that we keep a nice sane clip over to Walnut and bang out the lap since we weren't going to catch the next guys and we hadn't seen anyone behind us for a while.

Shane was looking mighty spry, and he pulled most of the Parmer wind-tunnel which was awesome. Rolled the Walnut lap without incident and came in at 2:59pm, 8h19m after starting, tied for 16th place with Shane (Strava link). I think if the BCGB lap would have been the same as last year, we would have hit our 9hr goal so I'm happy with the results.

Thanks to Shane Wolfe and Nick Picchetti for pulling and the Trail Angels for the water and smiles. Thanks to my wife, mother and daughters for all the cheering. Thanks again to the EB crew - great event. 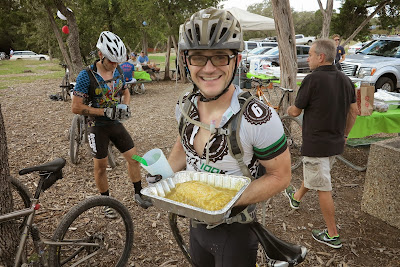