Thanks to the EB crew for putting on one of the best rides of the year. I understand the kind of work that goes into free-grassroots-local-dirt and I applaud you for doing such a reliably great job. I’d also like to offer a big thank you to the lads at Thirsty Planet for providing a nearly frozen keg of my favorite beer in the whole whirled - Thirsty Goat! Since this’ll probably end up TLDR, I’ll go ahead and mention that my buddy Rob decided to roll his rigid single-speed this year. Spoiler alert - he finished and you should've seen the bruises on his palms - dude looked like he’d been slap-fighting statues.

I went out with the first group and the ride down, shepherded by Craig, was surely faster than in years past (as evidenced by my PRs). In my experience, self-partitioning into faster/slower groups works well. That way, when you hit the GO button at the trailhead, you have a lot less stress on riders and fewer pissing-contests overall.

Once we hit the Greenbelt, Shane and I worked around a few non-natives who were balking at the rock and hooked up with the chase group right at Rudy’s. Shane, running a single-speed got his momentum squashed by a few riders ahead of us but with my 1x10 I was able to work around the traffic. Knowing my fitness level and how much I didn't train for this I knew I should drop off, but I didn't. No matter how much I know it’ll dead-leg me later, I’ll always chase a rabbit. When I arrived at the HOL, my family was waiting for me with signs and cheers - the kind of thing that puts smiles on your face for hours later. A big thanks to my family and Dave (an EBer in years past) who gave my wife a play-by-play on the guys as they rolled up the hill (it’s too early, he skipped something; this guy got lost, he’s way faster than the pack he’s in, etc.). My lovely wife said his insight made watching lycra-clad sweaty masochists much more fun. I stuck with the chase group till 360, then those kids dropped me like stone. Nonetheless, it was nice to hit the Hill of Life near the front.

Jason S. passed me really early on 360; turns out he had to peel off the lead group b/c they crossed the creek back to the east side way too late and missed the turn up Rudy’s. That decision had to be demoralizing but he gets serious props backtracking,hopping in line behind us regular-joes, and doing the miles.

The rest of 360 was a solo cruise for me although I did get some great cheering from the Frenchies - thanks guys! Ran into Paul B. for a bit in CP but the rest of it was solo. On the way out I heard my name being called from the Angel station but I made a silly decision that I wanted radioactive hose water at the fire station instead of delicious Nutella and clean cold clear water from Hoss and company. Sometimes the delirium sets in early...

Caught up to Shane as he was pushing his SS up Jester and stopped to do the walk with him. Josh D. had just passed me a few minutes earlier and for a brief moment I considered chasing him (he was behind me b/c he started 15 min late and had been playing catch up). I decided to let him go because I knew chasing that bunny would pretty much guarantee a grisly death. Shane and I rode over to St. Ed’s together and knocked the lap out.

At the top of Thumper I felt decent, excited actually to get on the trail. ~15 min into Thumper the heat started to get to me. After 30 min, I was getting silly and could barely keep my eyes open. After about 50 minutes I was stopped and was considering taking off my pack, getting out my phone and setting an alarm for 15 minutes so I could get some sleep. A smarter part of my brain decided that’s how you get snakebit so I H’dTFU and dragged out. Shane was wrapping up his Angel stop and asked me if I wanted him to wait for me. I said ‘hell no man, I’ll see you 25 minutes after you finish’ and he took off on his SS. At the aid station I poured ~½ bottle of ice water on my head and I was literally a new man. I threw some water in a bottle, grabbed an orange quarter and hooked it for Walnut. Big thanks to Cindy and crew!

Amos S. passed me working through the neighborhoods to get out to Palmer but he got slowed down by some smog-belching Dodge on the shoulder and I rolled up on him. Since I still had my momentum I called to him to hop-on and pulled the rest of the way to Walnut. He asked me how well Walnut was marked and I said it should be pretty easy to follow the blue squares. That turned out to be untrue - sorry about that. The construction coupled with the a few unmarked splits (root drop) got the best of him. I haven’t ridden Walnut since the last EB and I was unaware of the mess they've made (I still rode the route I knew, orange drift fence be damned!). Rolled in at 8h12m - 7 minutes faster than last year but I attribute that entirely to Craig’s F1 worthy sprint down to the Greenbelt.

I was unprepared for the ride this year, hell my longest ride since last EB was 27 miles and 95% of my riding this past year has been sub-10-mile Greenbelt back trails. I've set up a calendar alert for September 1 though; "do longer rides or die in Thumper". That'll do the trick :)

Thanks again to all the organizers, my cheering family, the Angels, the guys who helped pull me and those guys who I pulled (because without you behind me I’d have gone a lot slower). See y’all next year. 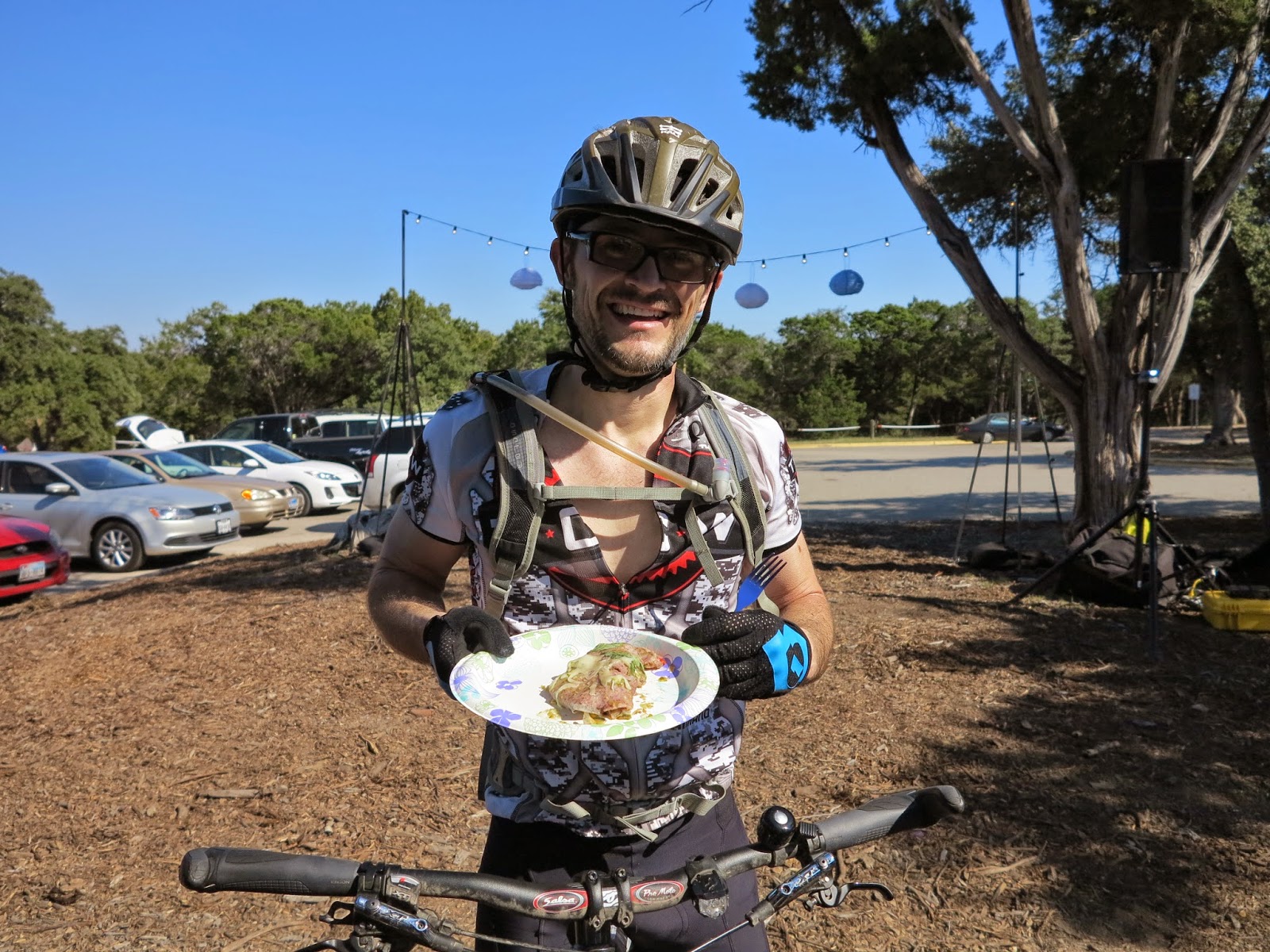