The ride started off with a route that used the new Walnut Creek bridges to get us out of the park with dry feet (very nice). The roll south was brisk, and we ended up entering the Greenbelt about 7:30. [[Quick Note Of Recognition for the loon who tried to jump a wire mesh silt fence along Mopac and pulled a super sweet endo going like 20 mph. Made getting up at 5am so worth it]]. Just before Zilker, however, the ride leader got a bit turned around and took us the wrong way so we had to double back on ourselves. I was near the front and was caught in the mess so I entered the GB, I’m guessing, about 30th? At the first creek crossing a bunch of guys were working their way around the water like they were made of sugar. As I plunged in, caveman style, I called out ‘Yer all gonna git wet anyway!’. The fear of wet footsies helped me make up like 10 spots right there! The rest of the GB ride was pretty uneventful as I worked my way around groups of folks, finally catching up to Shane at the bottom of Walls.

Side note: this was also about the time I decided to take my first big drink of my homemade nuclear pickle juice (50% water, 50% vinegar, dash of salt, dash of sugar). I almost died, gaping like a fish as the sludge had a play day with my taste buds. Pro tip, pickle juice works but you have to be ready for that intense flavor. I found over the ride that I needed to take 3 deep, calming breaths before a shot. It really did seem to knock out cramps within ~40 seconds. It’s a bit of a horror show, but the results have earned it a place in my arsenal. 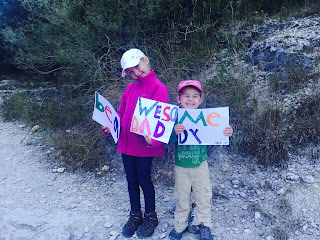 Shane, on a SS, had to hop off and walk near the start of EZ up so he let me by. As I rode off I was bellowing encouragement, but I wouldn't see my usual partner in crime again until Thumper. I ran into Jason, also on a SS, at the beginning of Soupcan. We rode the rest of the way to the HOL, where his technological disadvantage dictated he'd be walking; I decided to burn some matches. I almost no tapped it but I flubbed the little ledge ramp thingie. Thankfully my wife and kids didn’t see that so I got to ride past the cheering ‘GO DADDY BE AWESOME!’ crew like I’d been upright the whole way. Gary was waiting alongside my wife and taking pictures. He told me I was only 90 seconds behind the leaders and that I was in 9th place! At the very top of the HOL, Chris snapped a pic of my 181 bpm misery. 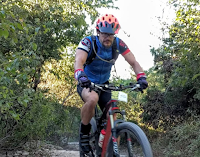 At the top, I actually had to ask a complete stranger to help me get my vest off because my fingers were totally numb from the 50 degree start but my core was overheating from the climb (thanks, stranger, I don’t usually do that on the first date - call me!).

I made it up Courtyard (Willie Nelson for President!) and the CP road w/o incident. I didn't see anyone so I knew I was pretty close to the front. Entered CP with a guy named Don who seemed unfamiliar with the trails. He was on me for a bit but got lost in all the dust and moto fumes. Made it out of CP without incident and I didn’t see anyone except Don the whole time (he was a nip lost but got it figured out). At the pavilion, I was just starting to mix up my infinit as the leaders were rolling out. Josh called to me to see if I was coming with them and I told him ‘I’ll catch-you-up in Thumper’. Yeah, right...

I hit 45 mph on the way down the City Park road. Tis a silly speed on a bicycle! I rode all of Jester, mostly b/c Chris was standing in the middle of the road making videos and my pride wouldn’t let me succumb to my leg's insistence that I was being unreasonable. I then sat at the Lakeway light for what seemed like 5 minutes, popped up 360 and hooked it up Spicewood. At this point I hadn't seen anyone since I left City Park and wouldn't until I was out of St. Ed's. St. Ed’s went w/o incident; I had to work around a few groups of very nice hikers who gave me lots of encouragement. I walked the death cliff - I got kids man! On the way back to Thumper, I passed a few guys heading to St. Ed’s on the road and they were cheering me to catch the leaders.

Gave my name and blood type to Mrs. Dawn and dove in. Saw the leaders pretty quickly - a switchback or so away and decided to try to actually catch them. At the 2 way section Shane was just starting the rocky climb bit and said ‘Thad, my bouncing baby boy, your family is waiting for you at the top!’. That was awesome news and I set off feeling renewed (to be fair, Thumper quickly crushed those high spirits, but for a minute all was rosy). 58 minutes later on the final switchbacks I heard cleats clicking and I knew I'd almost caught the front group. Got a bunch of hugs from my kids at the station, dumped about ½ of my Infinit into my pack (the other ½ went all over), got enough water in the pack to make the powder at least chewy, stuffed 2 orange slices in my pants (sexy!) and headed off just behind the leaders to knock out the final miles. 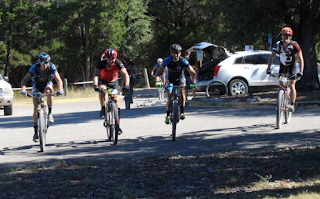 Caught up with the leaders about ½ mile up Yaupon - man, it’s nice in a group. I’m generally a solo rider, mostly by necessity (when my wife says I have an hour I’m out the door!) but I do feel a bit clumsy in a pack or echelon. That all said, it’s nice having a pace car and somebody to break the wind for you a bit. I gotta say, Noel, Joel, Josh, Dale and Ben were looking pretty spry at this late stage and I wasn’t sure that having caught them was the smartest thing to have done. But, once again, pride took over and locked me onto Josh’s wheel. In the end, it was a good thing I caught up because those guys don’t ride Walnut much and I don’t know if any of them had seen all the new stuff. We wrapped it up in a 6-way finish at 7 hours and 51 minutes. My new best EB time and my first, well first! 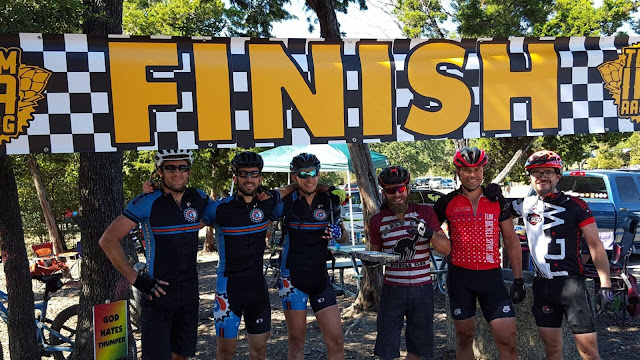 The Enchilada Buffet (EB) was rained out multiple times in 2015 and was finally cancelled. After the 2015 season, management changed hands and the Team IPA guys took over. Putting on events is hard, putting on free events seems harder, putting on a free event that 75% of the riders have done before and have strong opinions about the route and rules seems like a real nightmare. That said, they pulled it off with aplomb (and an-orange as well). Thanks guys, really great job.

Trail Angels - you guys make it so much more fun! Huge thanks to the City Park angel (not even sure who you were, I was a bit loopy) who helped me figure out how to get the water out of the closed jug. Thanks to Dawn (and Gracie) for entertaining my kiddos while I slogged through Thumper - those orange slices are life savers!

Last but not least, huge thanks to Phillip at Texas Cycle Werks for keeping me rolling and giving me these sweet new threads!

See everyone next year!
Posted by Unknown at 6:20 AM