For the ride down, EB Officials had asked me if I could lead us out of the park, but since I only ride Walnut once or twice a year I elected Shane. I did agree to lead the road section once we got on the other side of Mopac. Even with Shane's familiarity with WC, we still missed the turn so the ride started out with a silly bottleneck trying to get off the concrete path. Once we got onto the street I felt like I was spinning way too fast and I was pretty sure I'd regret it once I hit dirt. A single speed isn't the bike to spin on, especially if you're used to riding the Greenbelt. I've got no opportunity for that kind of conditioning (and who am I kidding, if I did I wouldn't take it anyway).
Once we got neared Zilker some dude ended up flying off the path into a storm drain. It's a pretty dangerous turn and I'm actually surprised that's the first time it's ever happened. Apparently he was fine. I happened to turn around and see it, just saw a back wheel about 4 feet in the air and then it disappeared.
I was following the GPS course but the bulk of the group had different ideas and ditched me right near the pedestrian bridge. I got back into line about 30 spots back b/c the GPS route was a bit longer and then again when they turned down towards the park and I went around the way Fruhe led us a few years ago. No big deal, we all got there but I ended up way past mid-pack.
Passed a lot of good natured riders. Pretty cool being back in the pack, able to walk up the pack but not really wanting to get crazy. Ended up leading 3-5 guys through the GB for a while, they passed me when I'd walk the ups and I'd catch them eventually. It was a really good, chill greenbelt EB. I think I'm gonna flash back to the original intent of the opener of the EB in future years, a nice chill social pace on the way down and bullshitting with dudes on the trail.
Got to see my family on the Hill of Life, as usual, but they had a special guest with them. Jason Smith's back is decidedly worse than mine and his doctors told him he was disallowed from EBing this year. 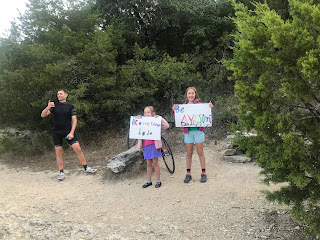 Got my yearly 'illegal emotional handup' from my kids and hit the road. I did have Jason to keep me company, making the road much more bearable. Ended up rolling up 360 with several guys including 1/2 of the single speeders in the whole ride! 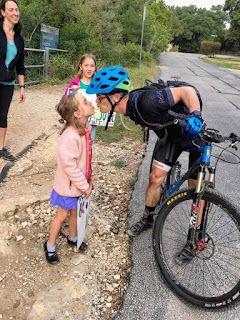 The roads, allow me a moment to gripe about the roads. Running a 32x19/18/17 makes the GB, CP, Eds and Thumper miserable but running that 20 makes the roads terrible. I'm not sure what my strat will be going forward, but man, those roads are about as fun as the dentist.
Passed the leaders coming out of City Park as I was about to roll in. Holy shit.
It was great to see Gary Crowell - hadn't seen him since the old ATX100k days, we did a bit of catching up and I headed in, cramping a good bit from the road on the way over. The trail did me wonders and by the time I was rolling out of CP I was feeling great. However, the road struck back and I was cramping about 10 min later. Sigh. Caught up to Dan and Travis (SS) and we once again headed out.
Rode up Eds with Yeamans, he got lost coming down. Entered Thumper with Travis but lost him pretty much immediately (he was on a 32x17 - yikes).
Thanks for the aid station. Cold water was a life saver.

Thumper sucked. no surprise. It was VERY hot on the 2nd half. Ran into Octavio and he needed some water.
Did some Zen breathing exercises and managed to take a micro-nap while riding on the way to Walnut. It was kinda nice, not sure how safe, however.
After the first bits of Walnut, I was feeling really good. Cooled down and the road cramps had subsided. Wrapped up in 9:14 with Shawn Boher (he'd had a plug come out of his tire like 3 times).
Officially I'm 3rd SS to cross, 13th overall. ~60 started, ~40 finished. There was a good bit of confusion about the route this year but that's the way it goes.
My suffer score was 964 which seems incredibly high. I felt bad most of the ride but good lord, that seems like a waterboard score.

Coming into the EB this year I'd had some health issues. My back when out on a ride, a decent amount of pain, left leg went numb for a few days. Took some chiropractic and physical therapy to walk right but I'd say I'm 90% at this point. The leg is just a little weak, basically, it's probably mostly OK but the nerves in the leg are lying to me. That's all for excuses.
Posted by Unknown at 1:41 PM